Why the Ethereum Merge matters 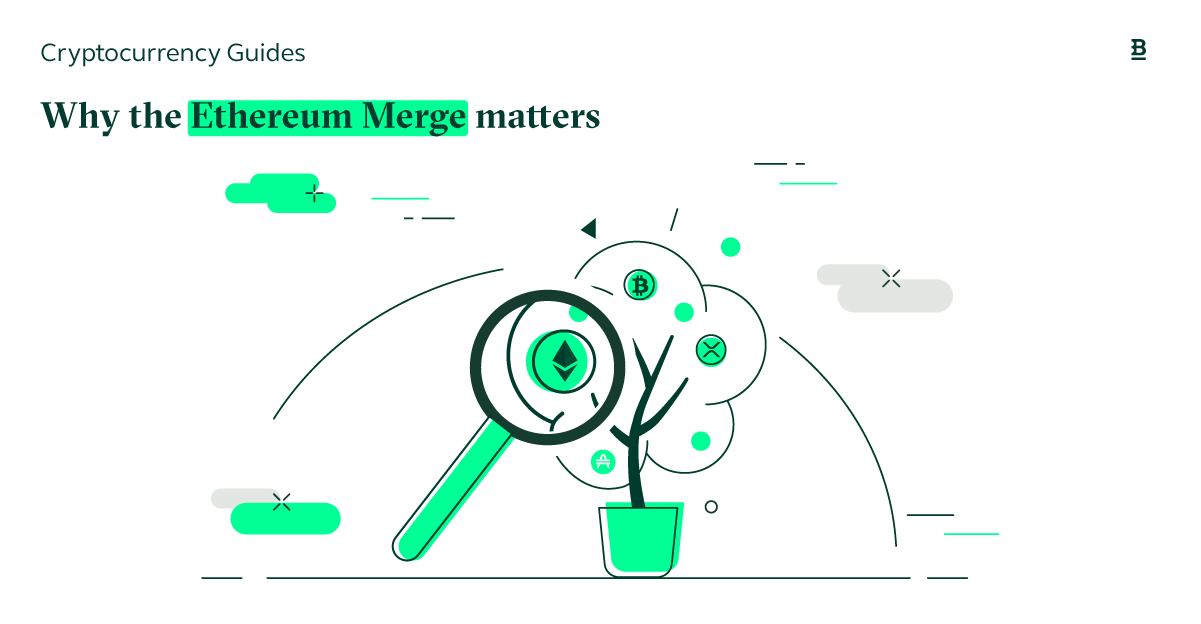 On or around September 15, 2022, the Ethereum blockchain will migrate from Proof of Work to Proof of Stake, marking a historical technology upgrade for the second most popular cryptocurrency by market capitalization.

Referred to as the Ethereum Merge, this highly anticipated event —and a defining moment for Web3— will bring Ethereum’s current network, known as the execution layer, together with the new consensus layer.

Along with merging the two layers, many other upgrades are set to launch simultaneously to improve the blockchain’s performance and make the network more scalable, secure, and sustainable. If you would like to read more about the Merge, check out our deep dive.

Why does the Merge matter?

The Merge marks an important milestone for crypto.

While Bitcoin introduced an entirely new monetary system to the world, Ethereum is the blockchain upon which most Web3 decentralized applications (dapps) are being built. These dapps range from decentralized finance (DeFi) applications, to virtual worlds and NFTs, to decentralized gaming.

However, the increase in activity on its blockchain has made using the Ethereum network very difficult, as the cost of transactions can be untenable, and traffic can become clogged. One of the early applications built on Ethereum, CryptoKitties, was so popular that it singlehandedly contributed to the network’s congestion.

The goal of the Ethereum Merge is to enable an exponential number of new users and applications, with upgrades designed to help scale the ecosystem in a secure and eco-friendly way.

How does the Merge improve Ethereum?

As new users get onboarded onto decentralized applications (dapps) and the world of Web3, scaling (or the ability for a network to handle more users and thus more transactions) becomes an urgent necessity.

Following the merge the Merge the blockchain will have the ability to introduce Sharding. This is a process that will allow the blockchain to be split into smaller interconnected pieces called shards and is planned to be introduced in 2023.

In this system, nodes (blockchain participants who store the history of the blockchain’s transactions) are assigned to a shard that only contains a subset of the Ethereum blockchain. Nodes are therefore no longer required to store Ethereum’s entire transaction history, making the blockchain more lightweight and faster. Nodes will no longer need to process and store all the blockchain data, but all information contained in a shard can still be shared among other nodes, helping keep the ledger decentralized and secure.

Sharding will increase the ability to accommodate more traffic which will increase transactions per second and onboard thousands of new users seamlessly.

The move from Proof of Work to Proof of Stake has also enabled Ethereum to be more decentralized and less attractive to attack.

In order to become a validator, users must stake their tokens, allowing them to help validate transactions. If an actor is deemed to be acting maliciously, the protocol would destroy (or slash) that validator’s ETH and remove them from the network. This mechanism disincentivizes any user from acting against the network’s rules in a way that Proof of Work does not.

Further, Proof of Stake helps eliminate the need for expensive equipment to run a node, which was a big barrier to entry for users wishing to help secure the network during its Proof of Work stage.

Of note, unlike Proof of Work systems, Proof of Stake relies on the number of tokens you own to vote on upgrades to the software. This increases the probability of a large player purchasing over half of the supply of ETH and taking control of the network. However, this outcome is extremely unlikely for Ethereum due to the market cap of its ETH cryptocurrency: it would take close to $100 billion dollars to do so at the current price.

By moving to a Proof of Stake system, the Ethereum Merge is set to reduce the blockchain’s energy consumption by 99.95%. The energy it takes to validate transactions will decrease significantly as the need for external hardware is replaced by collateral in the form of staking.

One of crypto’s long standing narratives against it is that it requires a significant amount of energy to run a blockchain. With the move to Proof of Stake, the reduction in carbon emissions to run the Ethereum blockchain is an important step towards mainstream adoption of Web3.

A historic upgrade that should lead to mainstream adoption

Considered to be one of the most historic events in Ethereum since its launch, the Merge will make for a more robust Ethereum network while also attracting more developers to Web3.

While the Merge is not expected to reduce gas fees (the measurement that expresses how much computational work needs to be done for a transaction or a contract to be written into the blockchain), scaling the blockchain will encourage development of more layer 2 solutions to help improve the user experience, speed, and transaction costs of Web3 applications for the next wave of new users.

What does it mean for me?

After the Merge, the earnings are expected to increase significantly. Take advantage of the Ethereum Merge with Bitstamp and start staking ETH today!

Please note that, while there may be some small delays in ETH transactions, the Ethereum Merge will not affect you as a Bitstamp user.

Lastly, remember we offer *0% trading fee on ETH and all other coins for your first US$1,000 (or equivalent) in trading volume over the previous 30-day rolling period.

Get started with Bitstamp

*The 0% trading fee applies for your total trading volume of up to US$1,000 (or equivalent) over the previous 30-day rolling period. So, if you’ve traded more than $1,000 over the past 30 days, the fee for the next tier would apply.