Home Product News The second batch of our August listing for the U.S. is here! Meet AAVE and ALGO!
Product News Bitstamp

The second batch of our August listing for the U.S. is here! Meet AAVE and ALGO! 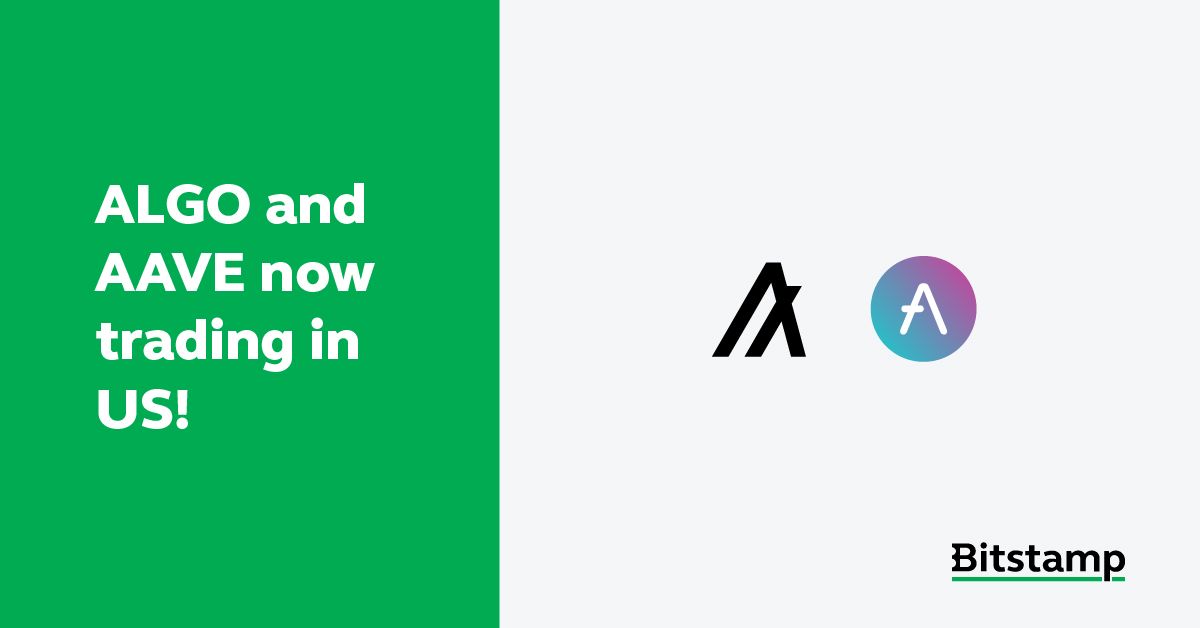 Our DeFi-focused approach to crypto continues as we list two assets that are big contributors to the versatility and widespread application of crypto in our everyday lives. The variety of different applications of both networks is immense, so we’re summing up both of the coins’ stories below.

Aave (AAVE) – Ever thought about borrowing crypto? AAVE offers just that. Well, not crypto per se, but a platform for borrowers and lenders. It’s a decentralized finance protocol where you can earn interest by depositing digital assets that can then be accessed by borrowers. In the summer of 2020, the time of the DeFi-mania, AAVE was amongst the biggest projects in terms of the amount of crypto locked in its protocol, and now it boasts with liquidity of over $23 billion.

To further explain: The crypto you decide to lend gets put into liquidity pools, and from there, it can be borrowed as a Flash Loan. There’s a catch though: they need to be paid back within the same transaction. These, in the Defi space, have been billed as the first uncollateralized loan option. Designed for developers, Flash Loans enable you to borrow instantly and easily with no collateral needed, provided that the liquidity is returned to the pool within one transaction block. Currently, you can choose from more than 20 cryptocurrencies to lend or borrow. That’s more than what the competition has to offer, and along with the current liquidity of more than 23 billion dollars, AAVE is the largest platform of its kind.

If you hold AAVE, their token, on the AAVE platform, you get discounted fees. The token also has another use, it acts as a governance token. The holders have a say in the future development of the Aave platform.

When AAVE launched in November 2017, it was named ETHLend. The rebranding was done in September next year, and since then it has gone by AAVE, which we admit is a bit catchier. By the way, ‘aave’ means ‘ghost’ in Finnish. Just thought you should know.

Algorand (ALGO) - If we start with the technicalities, Algorand builds technology that accelerates the convergence between decentralized and traditional finance by enabling the simple creation of next generation financial products, protocols and exchange of value.

To put that in words that a layman will understand: Algorand is a decentralized blockchain-based network that supports a wide array of applications. Primarily, it was invented to speed up transactions and improve efficiency, but now Algorand’s aim is to accelerate the convergence between traditional and decentralized finance.

The speed of transaction times of Bitcoin and other blockchains are gradually slowing down and the fees are increasingly higher, and Algorand is designed as a faster and cheaper alternative to the mainstream blockchains. There’s no mining as opposed to Bitcoin's energy-intensive process that’s based on a proof-of-work protocol. Algorand uses a permissionless pure proof-of-stake blockchain protocol, a type of consensus mechanism that requires users to stake their ETH to become validators in the network. It’s faster, more efficient, and last but not least, the transaction fees are significantly lower.

The systems in the network are secure are scalable, both critical properties for effective applications in the real world. There’s an increasing number of organizations, from fintechs, startups, financial services, institutions, and defi that are currently building on Algorand.

Here’s a full list of new trading pairs to be added at Bitstamp: